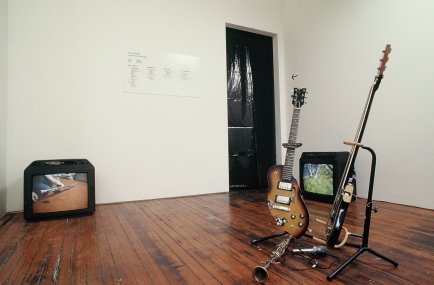 This is the only collaborative piece from the Gray Area Series. I bought used instruments
from pawn shops: electric guitar, electric bass, metal clarinet, and the microphone was donated to the project by Dez Cadena.

Off camera I disassembled the instruments. Some of the wooden areas of the guitar and bass I cut off and discarded. I was living in Los Angeles at the time and contacted 4 musicians that I knew. They reassembled the instruments that I took apart; putting them back together on camera (one take/unedited), just enough so they would work (back to the concept: something is what it is and is what it is not simultaneously). Included in the installation is a sign that lists all of the bands these musicians have played with, up until April 1994, when the piece was completed. The Gray Band existed for one song: “I will survive”. 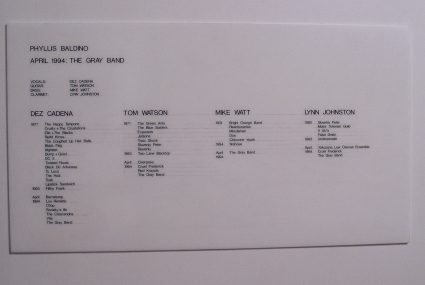